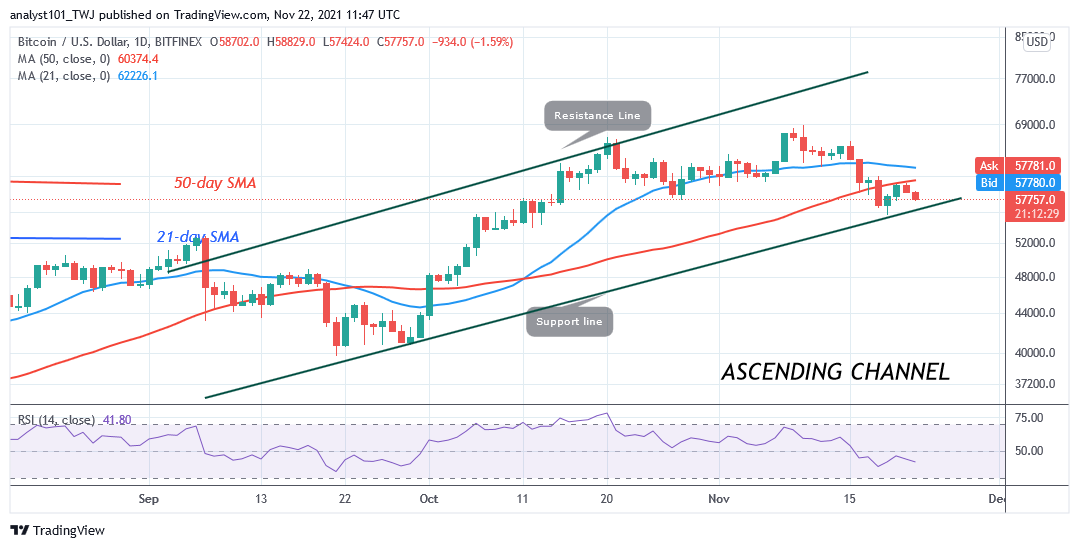 BTC/USD is still in a downward correction as Bitcoin looks oversold. Bitcoin bulls were repelled after two attempts to break above the $60,000 price level. Bitcoin is falling again as price resumes fluctuation between $55,560 and $60,000. Sellers may want to push the crypto to the previous low as the upward move was interrupted.

The proposal to launch Bitcoin City by President Nayib Bukele was first announced at El Salvador’s Bitcoin Week conference. The purpose is to celebrate Bitcoin’s mainstream adoption in the country and increase citizen involvement. The launching of Bitcoin City will be funded initially by $1 billion Bitcoin bonds. The growth of Bitcoin City will bring to the limelight the positive involvement of prominent crypto companies including cryptocurrency exchange Bitfinex and Adam Back’s Blockstream. According to Bitfinex’s Paolo Ardoino, the exchange will support El Salvador’s Bitcoin City by launching a securities platform to hold the Bitcoin bonds. He added:
“[The platform] will soon be home to many local and foreign digital assets offerings developing new digital asset regulation for the country! El Salvador, Bitfinex, and Blockstream are making history together.”

Meanwhile, Bitcoin has resumed a downward move to reach the previous low as Bitcoin looks oversold. The breaking of the current support at $55,700 will push Bitcoin into a deeper correction. However, more buyers buying the dips at lower levels will push BTC prices to rise above $60,000.