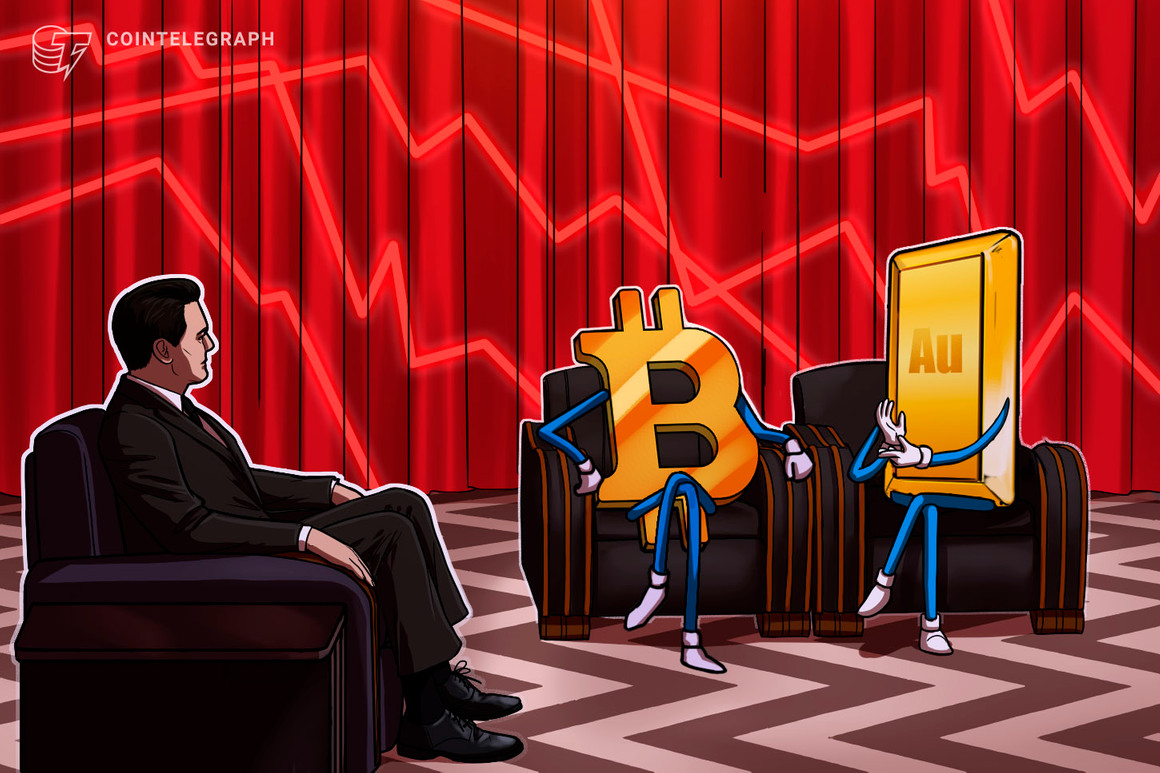 Bitcoin (BTC) and spot gold hovered below their key psychological levels on Wednesday as a stronger United States dollar weighed on investors’ appetite for hedging assets.

The BTC/USD exchange rate dropped 5.27% to its intraday low of $44,423 but recovered a portion of those losses after reclaiming the $45,000–46,000 range as support. The pair’s recovery also came as an extension to its ongoing rebound from $42,830, a level it reached on Tuesday after falling by more than 18% in the session.

Bitcoin’s massive sell-off coincided with a strikingly similar but dwarfed decline in the rivaling gold market. In detail, the precious metal suffered its worst daily drop in a month on Tuesday as spot XAU/USD rates fell below $1,800 following a minus 1.37% intraday move.

The large red hourly candle on gold and Bitcoin charts appeared between 10:00 and 11:00 UTC. However, the precious metal consolidated sideways after the big decline in contrast to Bitcoin that extended its downtrend.

In detail, the cryptocurrency crumbled under the weight of excessively leveraged bullish bets. Bybt data showed that about $3.68 billion worth of longs in the Bitcoin options market got liquidated in the last 24 hours, marking it the largest liquidation since June.

Automated liquidations caused additional selloffs in the Bitcoin market, as traders were forced to sell their BTC holdings to cover their margin calls.

Is the U.S. dollar responsible for the big drop?

Worth noting, the sudden drop in Bitcoin and gold prices coincided with a sharp spike in the U.S. dollar index (DXY).

The index, which measures the dollar’s strength against a basket of top national currencies, rose by 0.41% to 92.53 on Tuesday and continued climbing in the ongoing session to settle its intraday high at 92.73.

DXY moved away from its one-month low, benefiting from the rising U.S. Treasury yields ahead of the government debt sale this week, including $58 billion in three-year notes, $38 billion in 10-year notes, and $24 billion in 30-year bonds.

But with the Federal Reserve planning to start winding down its $120-billion-a-month asset purchasing facility at the end of this year, some analysts believe that bond yields will keep on recovering. In turn, they will provide the dollar a bullish backstop.

“The Federal Reserve we think is still likely to move toward tapering by the end of this year, the U.S. economy is likely to perform relatively strongly, so our view is minor dollar dips, minor dollar weakness is probably a buying opportunity.”

Meanwhile, the rising COVID-19 Delta variant threatens to dampen recovery prospects. In turn, it could force the Fed to sustain its expensive bond-buying program, thus keeping a lid on yields and the dollar alike.

As a result, the outlook for Bitcoin and gold looks mixed. The Federal Open Market Committee’s meeting later this month expects to shed more light on the taper timeline.

How do you DAO? Can DAOs scale and other burning questions – Cointelegraph Magazine