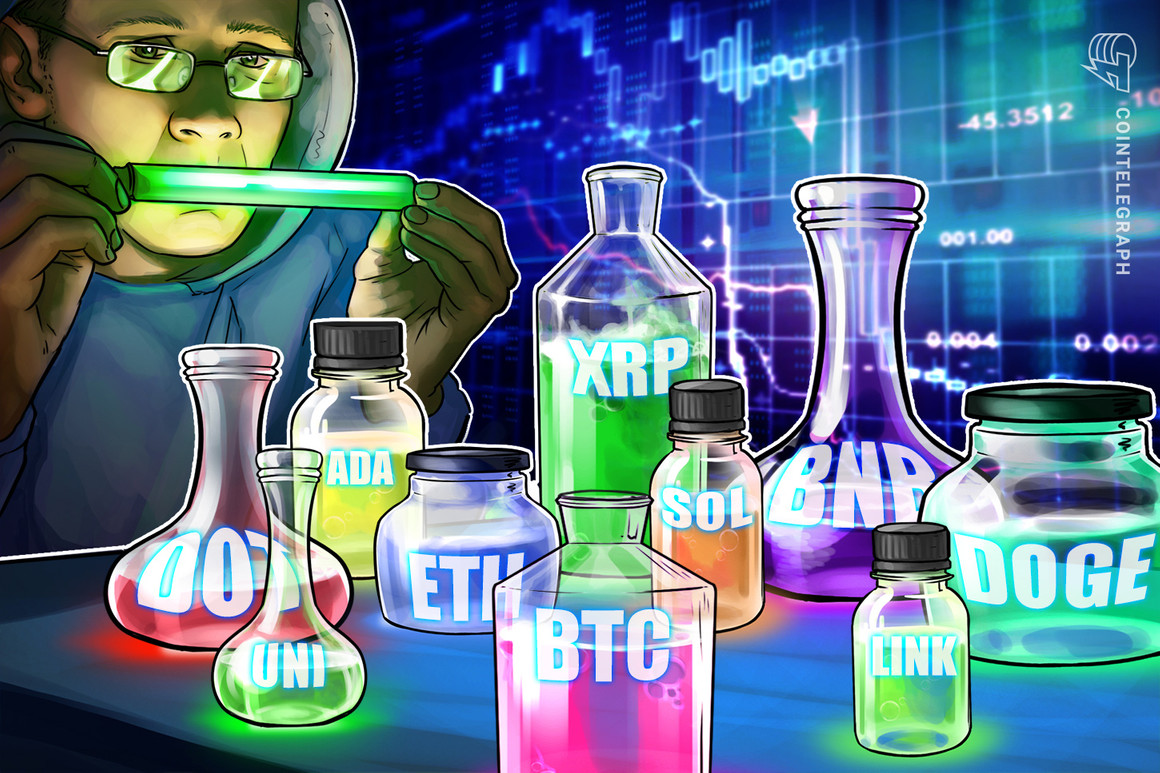 Bitcoin’s (BTC) market capitalization is nearing the $1 trillion mark and several altcoins have also been rallying hard in the past few days. This has driven the Crypto Fear and Greed Index into the extreme greed territory where the range fluctuates between 79 and 100. Generally, tops are made when the index hits around 95, which shows there is some more room to run.

PlanB, the creator of the Bitcoin stock-to-flow model, believes that BTC is on target to reach $100,000 by Christmas this year. Eventually, he believes that BTC price will be much higher than $100,000 before the end of the current halving cycle in 2024.

Tuesday marks an important milestone for Bitcoin because El Salvador has become the first sovereign country in the world to launch BTC as legal tender. Although the experiment will have its hiccups, it is likely to be closely monitored by other nations.

Could Bitcoin and altcoins pick up momentum and resume their up-move or will bears again pull the price below key support levels? Let’s study the charts of the top-10 cryptocurrencies to find out.

The bears will try to pull the price back below the $50,500 level and trap the aggressive bulls. If they do that, the BTC/USDT pair could drop to the 20-day exponential moving average ($48,476).

This is an important level to watch out for because the price has repeatedly bounced off it in the past few days. If the price again rebounds off the 20-day EMA, it will indicate that the sentiment remains positive. The bulls will then again attempt to resume the uptrend.

The first target level on the upside is $55,000 and then $60,000. This positive view will invalidate if the bears sink the price below the 20-day EMA. Such a move could attract profit-booking from short-term traders, pulling the price down to the 50-day simple moving average ($43,719).

Ether (ETH) broke above $4,000 on Sep. 3 but the bulls could not sustain the higher levels. This shows that bears are defending this level aggressively. However, a positive sign is that buyers have not given up much ground.

This suggests that bulls are in no hurry to book profits because they anticipate the up-move to continue. Although the upsloping moving averages signal advantage to buyers, the negative divergence on the RSI suggests that the bullish momentum may be weakening.

If bears pull the price below $3,700, the ETH/USDT pair could drop to the 20-day EMA ($3,493). A strong rebound off this support will indicate that bulls continue to accumulate on dips. The buyers will then try to push the price toward the all-time high at $4,372.72. Alternatively, a break below $3,377.89 may indicate a possible change in trend.

The bears have thwarted several attempts by the bulls to push Cardano (ADA) above the $2.97 to $3.10 overhead resistance zone. The negative divergence on the RSI also indicates that the bullish momentum is slowing down.

The ADA/USDT pair could drop to the 20-day EMA ($2.65), which is likely to act as a strong support. If the price rebounds off this level, the bulls will again try to propel the pair above the overhead zone. If they succeed, the pair could start its journey toward $3.50.

The bulls are struggling to drive Binance Coin (BNB) above the overhead resistance at $518.90 but a positive sign is that they have not allowed the price to dip below the 20-day EMA ($467). This suggests accumulation at lower levels.

If the price again bounces off the 20-day EMA, the buyers will try to thrust the BNB/USDT pair above $518.90. If they manage to do that, the pair could resume its uptrend and rally to the next target at $600.

Conversely, a break below the 20-day EMA could sink the price to $433. If bulls defend this level, the pair could remain range-bound between $433 and $518.90 for a few more days. A break and close below $433 may signal that bulls are losing their grip.

The bears tried to pull XRP back into the triangle on Sep. 4 but the bulls bought the dips. The buyers have pushed the price above the overhead resistance at $1.35 today, signaling the resumption of the uptrend.

If bulls sustain the price above $1.35, the XRP/USDT pair could rally to $1.66. The upsloping moving averages and the RSI near the overbought territory indicate the path of least resistance is to the upside.

On the contrary, if bulls fail to sustain the price above $1.35, the bears may pull the price back to the 20-day EMA ($1.19). That will increase the possibility of the pair consolidating between $1.05 and $1.35 for a few more days. A break and close below $1.05 will suggest that bears are back in the game.

Solana (SOL) is in a strong uptrend. Although bears tried to stall the uptrend at the psychological level at $150 on Sep. 4, they could not pull the price below $135.73. The shallow correction shows that traders were in no hurry to book profits.

Aggressive buying by the bulls has pushed the price above $150.60 today, signaling the resumption of the up-move. The SOL/USDT pair could now rally toward the next target objective at $179.45.

Although the pair is in a strong momentum, vertical rallies are rarely sustainable. They are usually followed by a sharp pullback as traders rush to the exit when the rally stalls. The bears will have to pull the price below $134.74 to signal the possible start of a deeper correction to the 20-day EMA ($105).

Although Dogecoin (DOGE) has been sustaining above the falling wedge for the past three days, the bulls are struggling to push the price toward the target objective at $0.35. This suggests that bears continue to sell on rallies.

Conversely, if bears sink the price below the 20-day EMA, the pair may drop to the 50-day SMA ($0.25). The marginally rising 20-day EMA and the RSI just above the midpoint suggest a minor advantage to the bulls.

This advantage will tilt in favor of the bears if the 50-day SMA cracks. That could open the doors for a decline to $0.21.

Polkadot (DOT) has been gradually moving up since breaking out of $28.60 but the slow pace of rise suggests a lack of conviction among bulls. The RSI has also formed a negative divergence indicating that the bullish momentum may be weakening.

The DOT/USDT pair could drop to the breakout level at $28.60. If the price rebounds off this level with strength, it will suggest accumulation by the bulls at lower levels. The buyers will then try to resume the uptrend toward the first target objective at $41.40.

Another possibility is that the price rebounds off $28.60 but stays below $35. That may lead to a few days of range-bound action between these two levels. A break and close below $28.60 will suggest that the current breakout was a bull trap. That may pull the price down to the 50-day SMA ($22).

Uniswap (UNI) turned down from the overhead resistance at $31.41 on Sep. 3 but the positive sign is that the bulls have not allowed the price to break below the 20-day EMA ($28).

The 20-day EMA is gradually sloping up, indicating a minor advantage to the bulls. However, the negative divergence on the RSI suggests that the bullish momentum may be slowing. The Doji candlestick pattern today indicates indecision among the bulls and the bears.

The bears tried to pull Chainlink (LINK) below the breakout level at $30 on Sep. 4 but the bulls had other plans. They aggressively bought the dip and have pushed the price above the overhead resistance at $35.33 today.

If bulls sustain the price above $35.33, the LINK/USDT pair could resume its uptrend and rally to $36 and then to $43.50. The upsloping moving averages and the RSI in the overbought territory suggest that bulls are in control.

Contrary to this assumption, if the price fails to sustain above $35.33, the bears may pull the price to $30. If this level holds, the pair may remain range-bound for a few days. A break and close below the 20-day EMA ($28) will signal that bulls are losing their grip.

Newbie Shiba Inu bites back, gains 25% vs. Dogecoin in February

PayPal reportedly confirms plans to explore the launch of a stablecoin