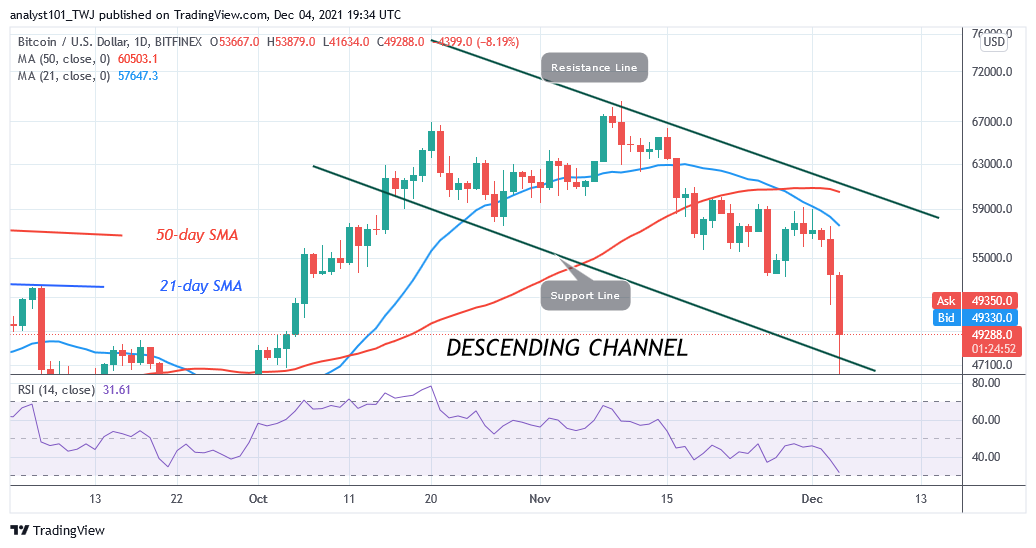 Bitcoin (BTC) has plunged to the low of $41,000 as Bitcoin crashes to $41K. The cryptocurrency has declined to the September 28 historical price level of $41,064. BTC/USD is likely to face deeper correction as it falls to the low of $48,442. Today, there is a long candlestick’s tail pointing to the $41,000 support level. The long candlestick’s tail is describing that the $41,000 support is a strong buying pressure.

Before the recent breakdown, Bitcoin was fluctuating between $56,000 and $59,000 price levels since November 29. However, in the last 48 hours, BTC price was compelled to consolidate in a tight range between $56,000 and $57,000. Perhaps, this tight consolidation must be responsible for the recent breakdown. The bears have broken below the $56,000 support to reach the low of $41,000. On the other hand, the bulls have bought the dips as BTC price makes an upward correction. The current breakdown is like a vertical tally not backed by fundamentals. Bitcoin is likely to recover if it breaks above $50,000 high or above the moving averages.

BTC price has broken below the moving averages indicating a downward movement of prices. The king coin is at level 29 of the Relative Strength Index for period 14. Bitcoin is now in the oversold region of the market. The implication is that selling pressure has reached bearish exhaustion. Buyers will emerge in the oversold region to push prices upward. Bitcoin has a bearish crossover. That is, 21-day line SMA crosses below the 50-day line SMA indicating a sell signal.

Meanwhile, Bitcoin is in a downward move as Bitcoin crashes to $41K. Meanwhile, on November 26 downtrend; a retraced candle body tested the 78.6% Fibonacci retracement level. The retracement indicates that BTC will fall to level 1.272 Fibonacci extension or $44,403.70.