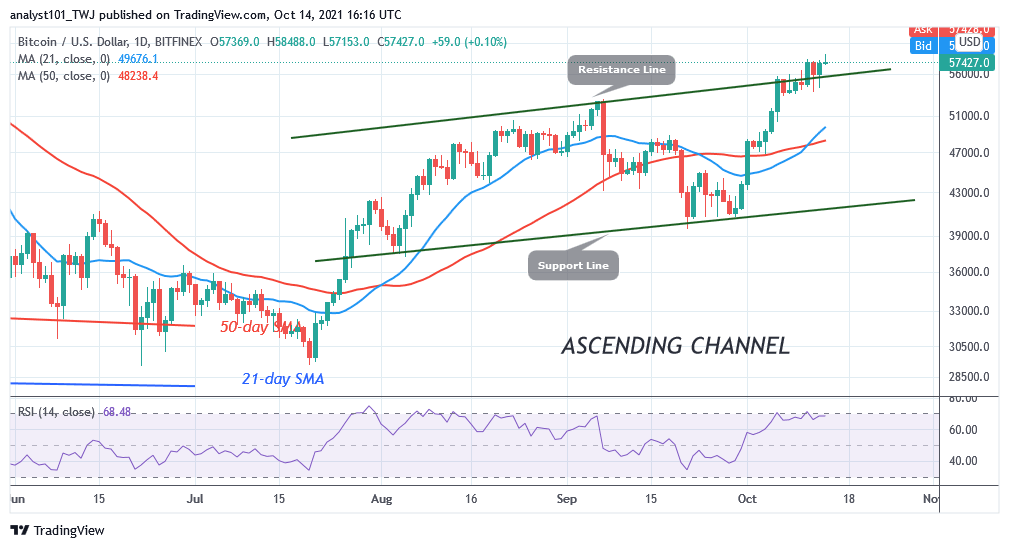 Today, BTC/USD retraces to the support above $57,100 as Bitcoin battles $58.4K high . In previous price action, buyers were unable to sustain the bullish momentum above $57,000 high. On October 13, BTC’s price rebounded to break the $57,000 resistance and the bullish momentum extended to the high of $58,400. However, the crypto has retraced to the breakout price level.

Freddy Borges is the Maiquetia airport director. The director indicated that a major international airport in Venezuela is about to resume acceptance of cryptocurrencies like Bitcoin for payment for tickets and other services. Simón Bolívar International Airport, also known as Maiquetia is preparing to accept cryptocurrency payments for services. The airport will comply with local industry standards. It is located in downtown Caracas, the capital of Venezuela. According to the director, the introduction of crypto payments at the Maiquetia airport will lead to the company’s commitment to advance toward international standards and drive digital currency adoption. Borges indicated that the crypto payment option will benefit foreign tourists, including those from Russia.

Meanwhile, BTC/USD has resumed its upward move as Bitcoin battles $58.4K high.Presently, crypto is facing rejection at the $58,400 high. Yesterday, the bulls broke the resistance at $57,000 to attain a high of $58,400. The uptrend will resume if buyers breach the recent high.

Keeping your funds safe for over a decade | by Peter Smith | @blockchain | Nov, 2022