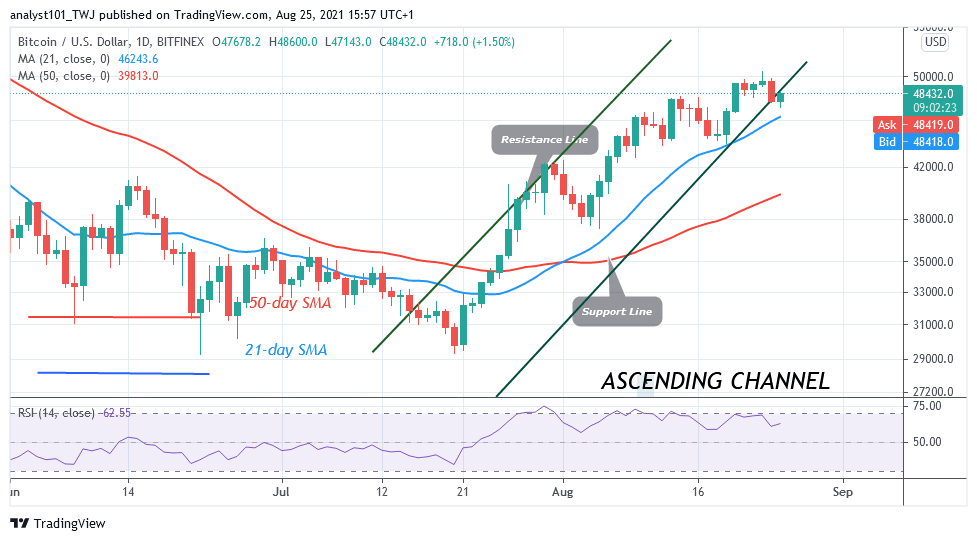 BTC/USD is in an upward move as it regains bullish momentum. Bitcoin has earlier declined to $47,143 low as bulls bought the dips. The retracement appears to have ended as Bitcoin resumed its upward move to retest the previous highs. Perhaps, buyers push on the upside to retest the $50,000 psychological price level.

In the previous price action, the bulls broke above the $50,000 psychological price level as it regains bullish momentum. The market reached the high of $50,558 but was repelled. Today, BTC’s price is recovering above the $47,600 support as it broke above the $48,000 resistance. Bitcoin has greater chances of a further upward move if it breaks above the $50,000 high. The market will rise above the $55,000 price level. Nonetheless, the bullish momentum will extend to $58,000 high. Conversely, if BTC/USD turns from the psychological price level, Bitcoin price will drop sharply to $48,000 low. Meanwhile, Bitcoin is at level 63 of the Relative Strength Index period 14. Also, it is above the 50% range of the daily stochastic. There is a likelihood of BTC price rising on the upside.

Bitcoin Adoption Will Bring a Change in Remittances in Central America

Meanwhile, BTC’s price has broken above the $48,000 resistance level as it regains bullish momentum.Buyers are pushing on the upside to revisit the $50,000 psychological price level. Meanwhile, on August 14 uptrend; a retraced candle body tested the 61.8% Fibonacci retracement level. The retracement indicates that BTC will rise to level 1.618 Fibonacci extension or level $54,302.00.

5 Most Bullish Metaverse Projects For 10x Returns in 2022

DOT Price Rallies 31% After The Launch Of Polkadot Parachain Auctions