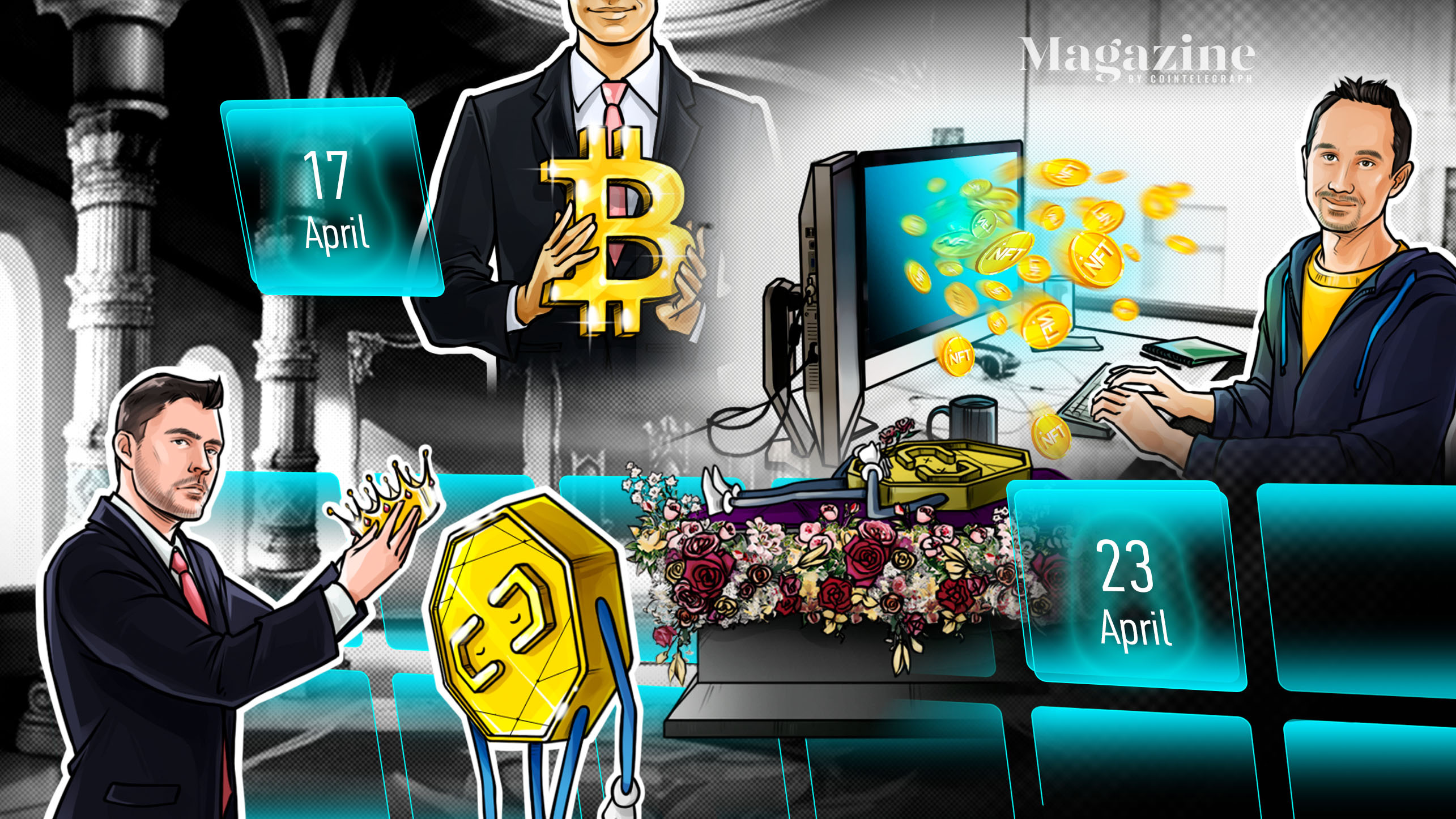 Coming every Saturday, Hodler’s Digest will help you track every single important news story that happened this week. The best (and worst) quotes, adoption and regulation highlights, leading coins, predictions and much more — a week on Cointelegraph in one link.

The firm first teased the idea back in January, after rolling out payment support for Bitcoin, Ether, Bitcoin Cash and Litecoin in November.

AMC is able to accept crypto payments via a partnership with BitPay, a Bitcoin payment service provider. It should be noted that merchants using BitPay don’t receive crypto payments outright. Instead, BitPay converts crypto payments into fiat before depositing it into the merchant’s account.

It was reported on Tuesday that $14 billion crypto exchange Blockchain.com is holding talks with banks regarding the launch of a potential initial public offering (IPO) this year.

Bloomberg’s unnamed sources stated that the talks were highly tentative and could change at any time (especially if those unnamed sources have been instructed by Blockchain.com to leak information to get a sense of public sentiment before revealing anything concrete).

If the firm manages to get through all the regulatory hurdles and go public via an IPO, it would join Coinbase as the only other U.S. crypto exchange to do so. Binance.US is also looking at a potential similar route in the future.

Speaking of the only U.S. crypto exchange to go public, Coinbase rolled out an early beta of its NFT marketplace for a select number of testers this week. At this stage, the early adopters of Coinbase NFT can create online profiles as well as buy and sell NFTs.

In a blog post on Tuesday, Coinbase vice president of product and ecosystem Sanchan Saxena hinted that Coinbase NFT would be a hybrid platform that takes elements from social media services and marketplaces such as OpenSea.

“While it is true that buying and selling NFTs is a big part of the ecosystem today, what we have learned by talking to many customers and creators is that there is more to it than just buying and selling,” said Saxena. “There is the community aspect of it.”

One of Germany’s banking giants, Commerzbank, revealed this week that it had applied for a crypto license, making it the first traditional financial institution in the country to do so.

A spokesperson told local media outlet Börsen-Zeitung that it had “applied for the crypto custody license in the first quarter of 2022.” The move would go a long way to mainstreaming crypto in the country, as the bank serves over 18 million customers and 70,000 institutional clients.

Any business looking to roll out crypto services in Germany must first seek approval from the Federal Financial Supervisory Authority, also known as BaFin.

Goldman Sachs is reportedly looking to secure an alliance with top derivatives exchange FTX, offering a strong show of faith in crypto in the banking sector.

According to the Financial Times, Goldman Sachs CEO David Solomon and FTX founder Sam Bankman-Fried met behind closed doors in March to discuss how a potential partnership could work for both firms.

The key areas of discussion were said to involve compliance in the U.S., with Goldman Sachs offering to help FTX navigate the murky waters of regulation, in addition to assisting with future funding rounds.

For more info on crypto prices, make sure to read Cointelegraph’s market analysis.

“I see Ethereum remaining as the dominant L1 for years to come, while Bitcoin retains its status as the primary store of value on the blockchain.”

“It’s early days, but we are encouraged by what we’re seeing and confident that blockchain games will continue to gain traction if they are interesting and fun to play.”

“NO! There are already digital means of payment! So what is CBDC for? […] Even more surveillance, prevention of bank runs, addiction and the consequent enslavement of mankind? This does not prevent money laundering; this already exists on a large scale for the top 10,000 in many tax havens, e.g., [the] Cayman Islands, Macau, Dubai, etc.”

“One of the guiding principles of the blockchain is that it is a public ledger that’s shared and everyone with a little bit of computing power has access to it, [including] law enforcement. So the secret service hasn’t been doing anything that wasn’t the original intent of the blockchain. We’re just using the same tracking and tracing mechanisms that were intended.”

“NFTs represent an opportunity for game developers to create games with player-owned economies; where the community of holders are both the early supporters of the game but also the main actors of its development and true stakeholders of its success.”

Sebastian Borget, co-founder of The Sandbox

“It’s very improbable that all the countries would ban noncustodial wallets, or any other aspect of Bitcoin’s peer-to-peer network for that matter.”

“My worldview pre-Bitcoin was pretty narrow. Life looked like school, work, retirement, death. Nowadays, I think slightly differently. The ultimate goal [now] might be better described as entrepreneurship and self-sovereignty.”

“The point of DeFi cannot just be to trade DeFi tokens.”

Prediction of the Week

Bitcoin’s price took a dive below $40,000 on April 17, according to Cointelegraph’s BTC price index. The asset then proceeded to dip down to almost $38,500 the following day, followed by a subsequent move up past $41,000 during the same session. By Thursday, the asset had made its way up to around $43,000, although downward action followed on the same day, with the asset then falling down below $40,000.

Pseudonymous trader “Crypto Ed” posted a YouTube video on Monday talking about BTC price action. Looking back now, his expectations for the asset have proven pretty accurate. He expected $37,500 to serve as a bouncing point for BTC, followed by a potential run to $43,000 if the asset surpassed $40,000. He noted $43,000 as possibly just a local high, with the asset facing downward price pressure after that. The past week shows BTC moving pretty much in line with Crypto Ed’s comments.

He did, however, also mention that the next two weeks (from the date of his Monday video), approximately, could ultimately see BTC arrive at the $30,000 price level.

FUD of the Week

After credit-based stablecoin protocol Beanstalk Farms was hacked for around $76 million earlier this week, the team offered a bounty of 10% if the hacker returned the funds.

Bounty offerings to blackhat hackers are becoming a common method for DeFi platforms of late, as they seem to be the most viable way of getting the project’s funds back and up and running as fast as possible.

Notably, the project’s founders Benjamin Weintraub, Brendan Sanderson and Michael Montoya admitted during a podcast interview on Monday that the flaws in Beanstalk’s design “ultimately led to its undoing.”

The security issue is related to default device settings on Apple devices that see a user’s seed phrase or “password-encrypted MetaMask vault” stored on iCloud if the user has enabled automatic backups for their MetaMask application data.

MetaMask’s warning came in response to reports from an NFT collector who goes by “revive_dom” on Twitter, who stated that their entire wallet containing $650,000 worth of digital assets and NFTs was wiped via this specific security issue.

On Monday, the U.S. Cybersecurity and Infrastructure Security Agency (CISA) and Federal Bureau of Investigation (FBI) sent out an alert regarding North Korean state-sponsored cyber attacks.

The warning was made in response to the Ronin Bridge hack last month, which is believed to have been conducted by North Korean hackers. The FBI and CISA highlighted that hackers are specifically targeting DeFi protocols and play-to-earn games in particular, with spearphishing and malware being the methods of choice.

“These actors will likely continue exploiting vulnerabilities of cryptocurrency technology firms, gaming companies, and exchanges to generate and launder funds to support the North Korean regime,” the CISA wrote.

Basic and weird: What the Metaverse is like right now

Your travel guide to what the Metaverse is like right now — in pictures.

In Georgia, crypto is a crucial tool for refugees escaping the war

Crypto, like most other new tech praised upon its creation as apolitical or neutral, becomes political in the hands of the people who use it and regulate it.

Dragon Crypto Gaming | Very exciting stuff is being built by @AsgardGameFi ! Check out what’s going there atm To celebrate the start of our collab, we want to award our communities Good luck!