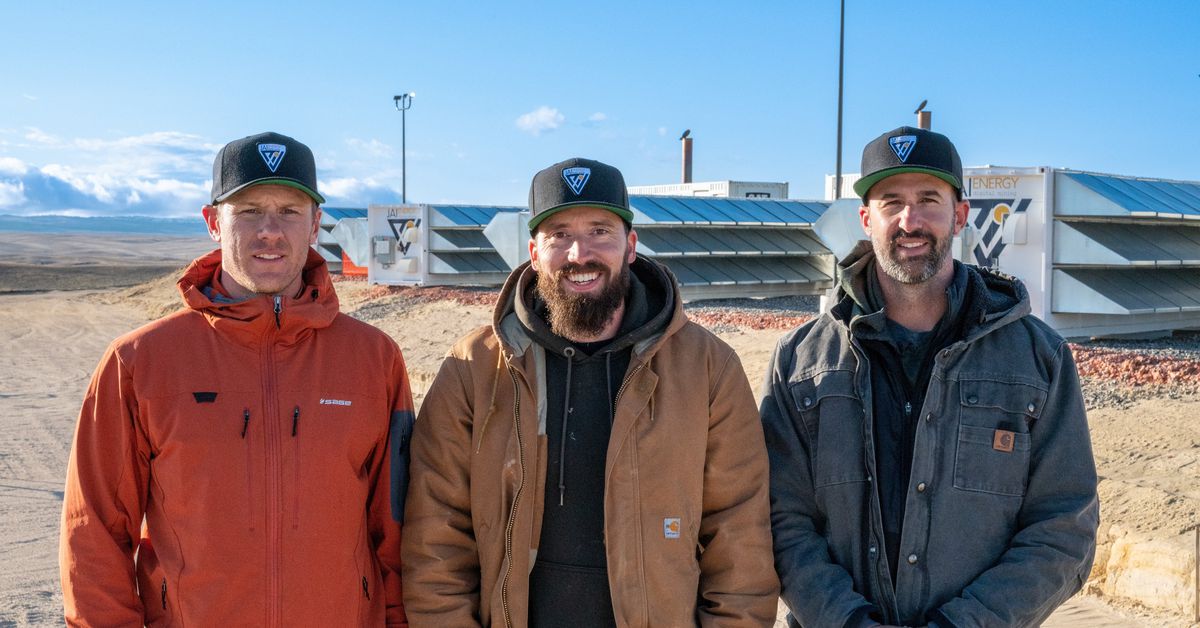 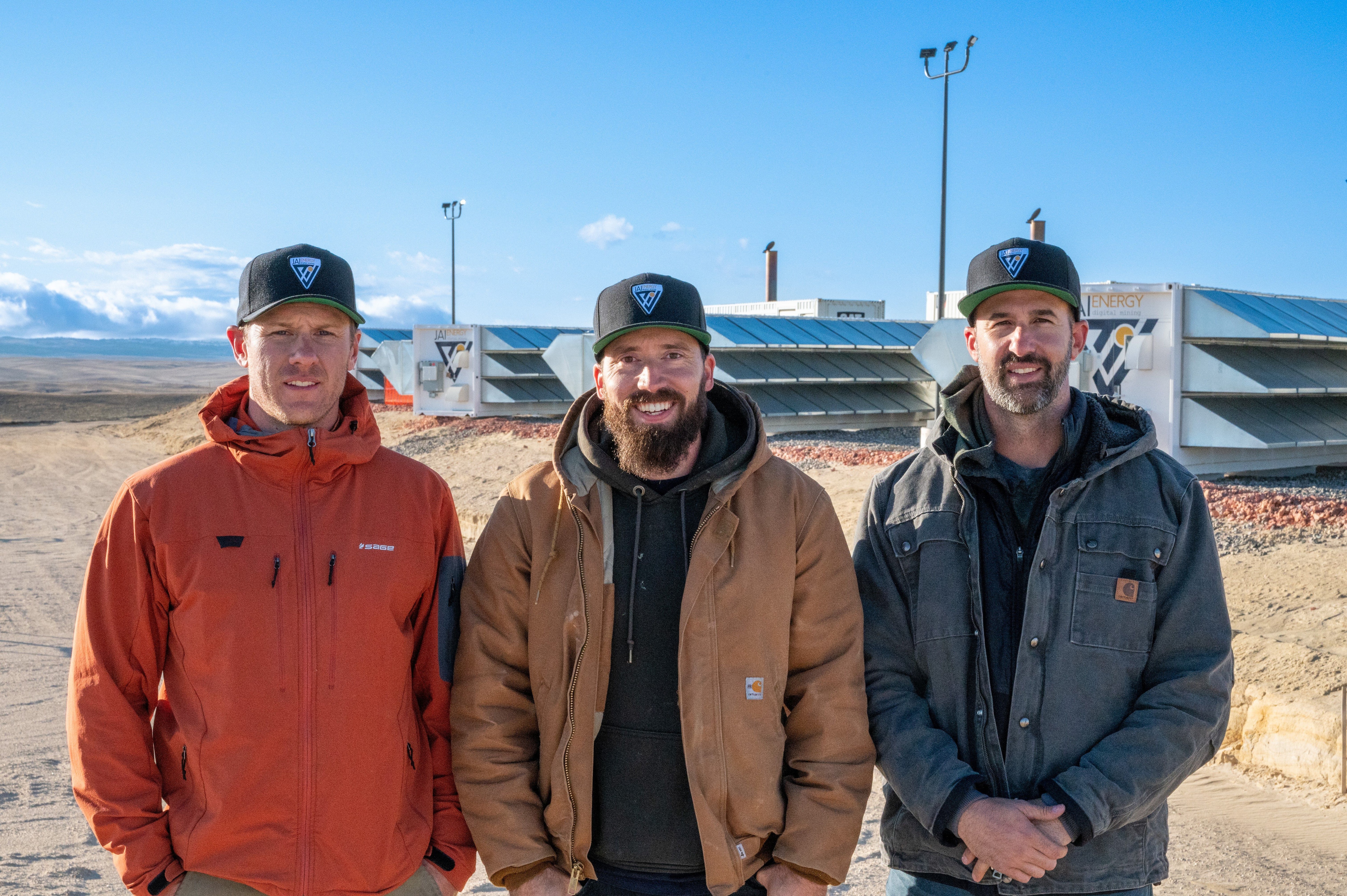 One is more than 150 years old. The other has existed for a little over a decade. One is a staple of industrial development, squarely grounded in the world of atoms. The other is an innovation of a digital era, financial plumbing for the world of bits. One involves sweaty outdoor work. The other involves a lot of math and abstraction inside cavernous air-conditioned data centers.

If the founders of bitcoin miner JAI Energy are right, the two industries are an ideal match.

Based in Casper, Wyo., (population: 58,446), these oil-and-gas veterans are on a mission to leave no energy stranded. Their thesis is that miners and drillers can solve each other’s problems: The crypto miners get a cheap source of electricity for their power-guzzling computers; the drillers can diversify their revenue sources and not have to waste vast amounts of excess energy produced at their current operations.

“Every oil and gas company in five-10 years from now will have some exposure to mining bitcoin,” Ryan Leachman, a founding partner of JAI, said in a recent interview with CoinDesk.

Drilling and producing oil and gas has been plagued by a lack of infrastructure to transport the fossil fuels. After drilling in Wyoming and encountering that obstacle, Leachman and fellow JAI founding partner Justin Ballard turned to bitcoin mining to reduce so-called flaring of natural gas, as state regulations would have otherwise required them to close their drilled oil and gas well.

Flaring of natural gas, where the excess gas is burned if encountered while drilling for fossil fuels, has become a standard industry practice because of the lack of transportation infrastructure. The process is under environmental scrutiny and U.S. President Joe Biden has pledged to cut methane emissions from oil and gas operations, at a time when investors are increasingly prioritizing climate-friendly companies in their portfolios.

A scenario of net-zero emissions by 2050 requires all non-emergency flaring to be eliminated globally by 2030, resulting in a 90% reduction in flared volumes by 2030, according to the International Energy Agency (IEA).

JAI’s “digital flare mitigation,” or using flared gas to power bitcoin mining, could be one way to help address the environmental concerns regarding the burning of natural gas.

To reduce the amount of gas burned, Leachman and Ballard in 2019 switched gears to form a bitcoin mining operation where they capture the flared gas, convert it to electricity and use it to power mining rigs. At its 12-acre mining farm in Wyoming, JAI mines bitcoin for itself and hosts machines for energy companies that may want to mine for bitcoin using excess flared gas. JAI also provides products and services for companies to capture their excess energy.

Read more: Bitcoin Mining Is Reshaping the Energy Sector and No One Is Talking About It

Now, Leachman and Ballard are expanding to Texas. The Lone Star State offers competitive rates for power, and JAI’s founders know the state well from their oil and gas days. One of JAI’s larger-scale projects in Texas will be “on-grid” as opposed to off-grid, meaning they will be drawing power from the electrical grid rather than from sources such as excess natural gas or solar power.

“Ultimately, we are trying to set ourselves up with sites that have the lowest power costs with an ability to continue to scale and grow our company,” Leachman said.

Bitcoin energy use in Texas

Texas has been at the forefront of grid and power concerns after the state experienced harsh winter storms earlier this year that prompted electrical outages. Even some bitcoin miners had to go offline. Texas Sen. Ted Cruz spoke at a blockchain summit in Austin last month, where he touted the benefits of having bitcoin miners on the grid as a source of interruptible load.

Bitcoin miners can aid “demand response” programs, which refers to formal or informal agreements to curtail demand when the grid is overtaxed and prices are high, CoinDesk reported last month following the summit. Bitcoin miners can also adjust their consumption to a level demanded by a grid operator during certain periods. Critics argue that merely adding new demand to the grid won’t solve Texas’ power problems.

However, Crusoe Energy, which is another firm that provides digital flare mitigation systems, thinks that bitcoin miners, renewable energy providers and grid operators have a chance to coexist, highlighting one of the company’s upcoming Texas projects that has connections to local power grids.

“In this setup, what we’re able to provide the renewable power generation company is a curtailable load resource,” CEO Chase Lochmiller told CoinDesk in an interview. “So we can actually curtail the draw of our machines during moments of peak power demand, and then we can consume all of the power during off-peak demand.”

He added that Crusoe has the ability to be the “buyer of last resort” when energy generated by renewable sources of energy isn’t being fully consumed and expects companies such as his to be “a mechanism to incentivize more renewable energy development.”

Bitcoin’s massive energy consumption has created concerns about its impact on the environment. Even though some industry executives have pushed back against the narrative that bitcoin mining is bad for the environment, many miners including Atlas Mining, CleanSpark and Stronghold Digital Mining are all using more sustainable sources of power for their operations.

A survey by the Bitcoin Mining Council, an industry forum, found that sustainable power has grown to about 58% of the total used by the industry worldwide during the third quarter from 3% in the second quarter. The increase is partly due to the rapid expansion of North American mining amid the exodus from China, and miners rotating toward more sustainable energy and modern mining techniques.

Traditional oil and gas companies may benefit financially from mining bitcoin, though that situation could continue to provide incentives for fossil fuel production, according to Matthew Schultz, chairman of bitcoin miner CleanSpark. Schultz said he isn’t convinced that large energy producers will take a bitcoin mining route, in light of ESG (environmental, social and governance) questions.

Read more: What Is Proof-of-Work?

Energy firms might think, “‘We’re already flaring the gas, why not make something out of it?’ I think that that’s an easy conclusion,” Schultz said in an interview with CoinDesk. However, if the flared gas becomes economically beneficial for an oil and gas company, it would become more likely to drill another well that’s going to have stranded gas, which would harm the environment further, he cautioned.

CleanSpark says it runs its operations with over 90% of carbon-neutral energy sourced primarily from nuclear, hydroelectric, solar and other renewable sources of energy.

Environmental critics might push for oil and gas producers to cap their wells altogether, versus opting to mine bitcoin with the excess gas; most flaring, however, occurs where natural gas is produced as a byproduct from oil drilling and where non-fossil fuel energy isn’t reliable enough yet to meet global energy needs. Cleaning up the wasted energy and engaging in flare mitigation is a better means to lowering emissions versus capping energy production, Crusoe’s Lochmiller said. The company lists Oklahoma City-based oil and gas producer Devon Energy as a customer that has pledged to reach flaring intensity of 0.5% or lower by 2025, and eliminate routine flaring by 2030.

Global oil demand fell nearly 7% in 2020 amid the COVID-19 pandemic, and flaring fell by only 5%, the IEA notes. Globally, 142 billion cubic meters of natural gas was flared in 2020 – roughly equivalent to the natural gas demand of Central and South America. That amount of flaring resulted in about 265 metric tons of carbon dioxide, nearly 8 metric tons of methane (240 metric tons of carbon dioxide-equivalent) and black soot, along with other greenhouse gases being directly emitted into the atmosphere.

Despite superficial differences, fundamentally there are many aspects of bitcoin mining that an energy producer will find familiar, according to Leachman. “One of the similarities is that the low-cost providers, or the low-cost operators, are going to be the ones that will have the staying power,’’ he said.

For a bitcoin miner, access to cheap power is essential to stay competitive. If natural gas that was going to waste can be turned into power for mining, electricity would be essentially free for the energy company’s mining operations, while adding a revenue stream.

Oil and gas producers, along with providers of infrastructure, like pipelines, “really have the potential to have a very asymmetrical risk profile to bitcoin mining,” Leachman said.

These energy companies already have a sustainable business, and if they dedicate a portion of their capital to bitcoin mining, it can almost act like a hedge for their main revenue stream during a down cycle for commodities, he explained. An additional aspect of bitcoin mining that’s attractive compared to oil and gas production is that crypto mining is “completely scalable,” Leachman said.

Energy producers face hurdles in ramping up production, whereas bitcoin miners can generate revenue quicker once they are up and running and eventually are able to increase the scale of their operations at a faster rate.

To be clear: Leachman isn’t saying all oil and gas companies will completely pivot to bitcoin mining.

“My recommendation for oil and gas companies wouldn’t be to necessarily have the goal to become the biggest bitcoin miner,” but rather to treat bitcoin mining as a secondary business that supplements their core business, he said.

Another part of Leachman’s pitch for bitcoin mining exposure is that it can act as digital storage, in a sense, for an energy company’s natural gas and provide better returns during periods of volatile commodity price fluctuations in traditional gas production.

Energy companies can convert their gases to bitcoin, hold the cryptocurrency digitally and participate in the upside as bitcoin prices appreciate in the future, he said.

By using the excess energy to mine bitcoin, “there is a chance that the small percentage that you dedicated to bitcoin mining could be worth significantly more than the gas that you traditionally would sell down the line,” he said.

Beyond oil and gas operations, utility companies can also explore bitcoin mining given their experience with power grids and storing energy, Leachman said.

Julien Dumoulin-Smith, a Bank of America research analyst, said in a note to clients that shared with CoinDesk that “unregulated independent power producers (IPPs) have the greatest opportunity to partner with miners and we have already seen agreements announced.”

Dumoulin-Smith highlighted utility Black Hills Corp. as the perfect example of such a business model. The company “appears to have the most exposure because of its Wyoming footprint and innovative Block Chain Interruptible Service (BCIS) tariff,” the Bank of America note said. Black Hills developed the BCIS to meet energy needs of cryptocurrency miners, including fixed cost per kilowatt-hour rates, and negotiated prices that remain fixed for a period of two to three years.

Another source of allure for companies in energy or other unrelated industries is that profit margins for bitcoin miners are now as high as 90%.

Binance CEO expects ‘very high volatility’ in crypto. Here’s how to trade it