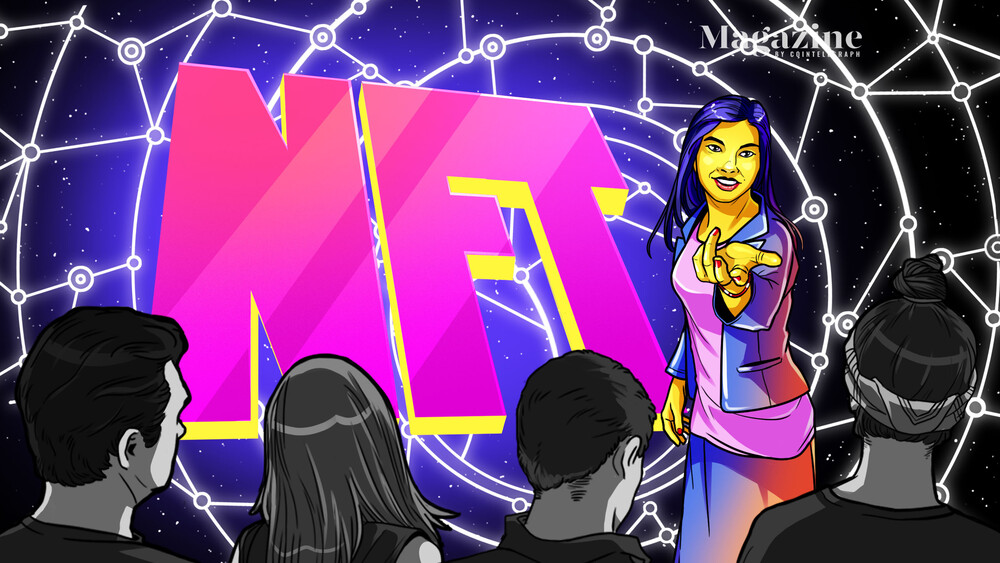 It was once said that the internet would make it possible for anyone with 1,000 fans to make a living, but Li Jin believes that in the age of NFTs, one or two serious supporters may be enough.

Jin is a flag bearer for the “passion economy,” which she describes as an economic system that allows and encourages people to make money while following their passions. For Jin, NFTs are a new tool that helps creators in the passion economy reach their “true fans” and form lasting relationships with them.

Through her venture firm, Atelier, Jin invests in “platforms that lower the barriers to entrepreneurship and broaden paths to work.” With a past in venture capital, she is well placed to help transform the way we think about work.

Bringing the passion back

“It’s been my dream to live in Paris, so I’m just hanging out here for the time being,” Jin tells Magazine toward the end of the interview, which comes after the wrap-up of the much-anticipated Ethereum Community Conference conference, also known as EthCC, that took place in the city. Despite admitting that she does not “fully understand why people are working on DeFi,“ which occupied much of the attention of conference-goers, Jin “organized a lunch for people working at the intersection of crypto and the creator economy.”

The present difficulties of travel are a good reason to savor every bit of a new city, but hanging out in a new place is, “for the time being,” not something the average worker can do, seeing as they tend to be chained to pesky things like physical offices and scheduled, mandatory in-person meetings. That’s, however, not the case for many creators — especially ones in the passion economy.

Why do we work, after all? When you ask a child what they want to do when they grow up, the answer is often — hopefully — filled with playfulness and passion. When asked why they chose a specific career, the answer rarely revolves around salary, job security or benefits. Upon growing up, many seem to abandon these core motivations, instead seeking a living by fitting into a corporate structure or mindlessly filling freelance orders.

The passion seems to be coming back, according to Jin. There is a “shift underway from gig marketplaces, which were built around really commoditized services and products, to more flexible, creative marketplaces that would actually enable people to make income from doing more of the things that they really love,” she explains optimistically.

This is the core of the passion economy, which “represents a new type of work that is completely separate from a traditional employer-employee relationship.” This means that a passion “worker,” if we can call them that, does not answer to bosses in a corporate structure, nor do they act as interchangeable — or fungible — freelancers a la Fiverr or Uber. Instead, they simply do their thing — and clients/subscribers pay for the privilege of being part of the journey.

In a sense, the output of any creative worker — be it written, designed or painted — is in effect a nonreplicable, nonfungible “token” of their effort. This article is, in effect, an off-blockchain NFT created by myself — sold to Magazine, but forever connected to me. The work output of non-creative workers like security guards or Uber drivers is decidedly less like a unique NFT and more like a commoditized, non-supply-capped “work hour” token with a clear market value.

The relationship between NFTs and creative work is far more than mere associative wordplay, as the technology allows creatives to mint their work on the blockchain and benefit from its sales and resales.

“This year, a lot of creators became aware of crypto and what it could do for them in terms of earning income in a way that wasn’t possible before.”

Jin hails from Beijing, with her academic-minded parents immigrating to Pittsburgh in the early 1990s. She describes growing up “very poor” during her first years in America, leading her parents to push her toward a safe career.

She enrolled at Harvard University in 2008, but her parents were unhappy with her major — English literature — telling her that she was doomed to become a starving writer and that her choice “was bringing shame upon the family.” To appease her parents, Jin switched to statistics.

For her first job, she worked as a reporter for the Pittsburgh Post-Gazette, where she was “sent to cover the G20 conference as an 19-year-old.” She worked in mergers & acquisitions at Blackstone in 2011 during college, and later worked for several years as a Strategy Associate at Capital One and Product Manager at Shopkick, a mobile shopping startup in Silicon Valley.

When Shopkick was acquired, Jin “was unsure of my next role in tech,” and followed the path of her peers and started at a Master in Business Administration degree at Wharton in 2016, but continued to apply for jobs  “If you want to stay in technology, maybe you should try venture capital — it’ll be a really great way to have a more bird’s-eye view of the whole industry,” a mentor advised her.

She dropped out two weeks in — after getting an offer from Andressen Horowitz, the famous venture capital firm also known as a16z. “I didn’t really want to go to business school,” she recalls.

As a deal partner, Jin was responsible for “meeting with startups all day, talking to founders, taking pitches, helping with the due diligence process,” often sitting on the boards of companies as an observer for her employer. Many of these companies were what Jin refers to as “consumer creator platforms,” like Imgur, Patreon and Substack.

For Jin, these companies signal a “shift from the gig economy to the passion economy, where new platforms enable people to do what they love for a living and to monetize their individuality.” One by one, the tools enabling a thriving creative middle class are being released. In her February 2020 article “100 True Fans,” she lays out a formula by which creatives can achieve a middle-class income of $100,000 per year with only 100 true fans who each contribute an average of $83 per month.

Today, much of Jin’s envisioned “middle class” of creatives remain digital peasants, “uploading, probably, millions — hundreds of millions — of images every day to Instagram and getting no share of the advertising revenue.”

“Instagram makes a ton on advertising, but creators don’t see any of that — I think of that as 100% taxation.”

Artists get no material benefit even if millions view their profiles. Instagram, on the other hand, gets “billions of dollars worth of equity value for itself” from the labor of its posters — why shouldn’t content creators demand a share of the cheese? Beeple posted nearly 5,000 pieces of art before finally cashing in for tens of millions with the NFT boom.

In July 2020, Jin decided that it was time to practice what she was preaching and “build an entire firm that was dedicated to this particular emerging category, and so that’s what I did — and I also felt like the best way to understand something and to evaluate it is to live it myself.”

The result was Atelier, an investment firm with an initial $13 million portfolio of platforms that allow users to forge their own futures.

“I started Atelier to fund a specific vision of the world: a world in which people are able to do what they love for a living and to have a more fulfilling and purposeful life.”

Jin was first exposed to cryptocurrency in 2017 when her employer, a16z, became “one of the earliest funds that started its own crypto fund.” Though she often worked with people involved with the fund, she found the industry abstract, as “It wasn’t yet touching everyday consumers.”

This year, things have changed.

“There’s been way more intersection with consumers and the creator economy, particularly this year with NFTs.“

NFTs, Jin believes, take her idea of 100 true fans even further. “You could just have one true fan, or ideally like two true fans who bid against each other,” she explains. Though only one person would finally own each digital asset, “Their content can still be freely accessible and can spread virally,” launching a chain reaction that makes it even more likely that true fans “who really value and are willing to pay for the original version” will come along.

After writing an essay titled “The Case For Universal Creative Income“ in April of this year, Jin auctioned an NFT representing the article for 5.6969 ETH — all of which was donated to Yield Guild Games’ Sponsor-A-Scholar program. Though anyone can read the article for free, someone paid 5.6969 ETH for the original.

Jin feels that creatives should view crypto as a way to monetize their work, which she describes as the third step of the creative economy funnel. The first step is all about “How do I build my audience — how do I get discovered?“ The second step is “How do I engage my audience more deeply?“

Though cryptocurrency and NFTs have huge potential as rocket fuel for the passion economy — a term Jin coined — her main focus lies with fostering creators in making the jump. She runs a course, “Building for the Creator Economy,” that teaches participants the ins and outs of her world over three weeks.

Earlier this year, she also launched the Atelier Angels Pilot Program to train 30 founders to become angel investors — thereby gaining additional revenue streams while learning more about business. For Jin and Atelier, the future belongs to the creators — so who better to invest in it?