Bitcoin is stabilizing above the $40,000 support level after China’s latest crypto ban triggered immediate selling. BTC is down about 11% over the past week, compared to a 15% decline in ether over the same period. Analysts expect volatility to remain elevated given the regulatory headwinds.

Exchange tokens, especially those with a large share of Chinese users, also sold off on Friday. Huobi’s token was down about 23% over the past 24 hours and the token of FTX was down 12% over the same period.

“Around 10% of global bitcoin volumes come from OKEX and Huobi; China regulation pulled that down from 30% in 2019,” James Butterfill, investment strategist at CoinShares, wrote in a LinkedIn post on Friday. He added Friday’s crackdown should not have a major impact on crypto prices overall.

Still, some analysts emphasized the importance of China’s regulation. “At a stroke, effectively, one in seven of the world’s population is now officially frozen out of the crypto asset market,” Simon Peters, analyst at eToro, wrote in an email to CoinDesk. “Until now crypto was well-established in the region, making its total exclusion a significant event.”

And regulatory pressure is nothing new to crypto markets. Analysts and traders continue to track government crackdowns, which typically occur during volatile trading periods.

“This is not the first time such an announcement has come out of China, as it had enacted similar punitive measures in 2013 and then again in 2017, following the ICO (initial coin offering) craze,” FundStrat, a global advisory firm, wrote in a report on Friday.

The People’s Bank of China posted a list of forbidden activities that included some previously in the gray zone of regulation, while the National Development and Reform Commission set out a plan to phase out mining entirely, reports CoinDesk’s Eliza Gkritsi.

The notice banned banks and other financial institutions from offering services related to crypto. Further, regulators said they want to establish a mechanism for early warning and stopping “hype” in crypto trading and mining activities.

Crypto mining is to be deemed an “outdated” industry, according to regulators. No new projects are allowed, and existing ones will be given time to exit.

Miners have been fleeing China in the months leading up to the latest crypto ban. The chart below shows crypto miner migration to Kazakhstan, the U.S., Argentina and other nations.

“Kazakhstan has been one for the biggest beneficiaries of China’s long-standing adversarial approach to crypto-mining,” FundStrat wrote. “With a cost of roughly $0.03–$0.04 per kW/h (depending on the tenge-dollar exchange rate), electricity tariffs in Kazakhstan are among the cheapest in the world,” FundStrat added. 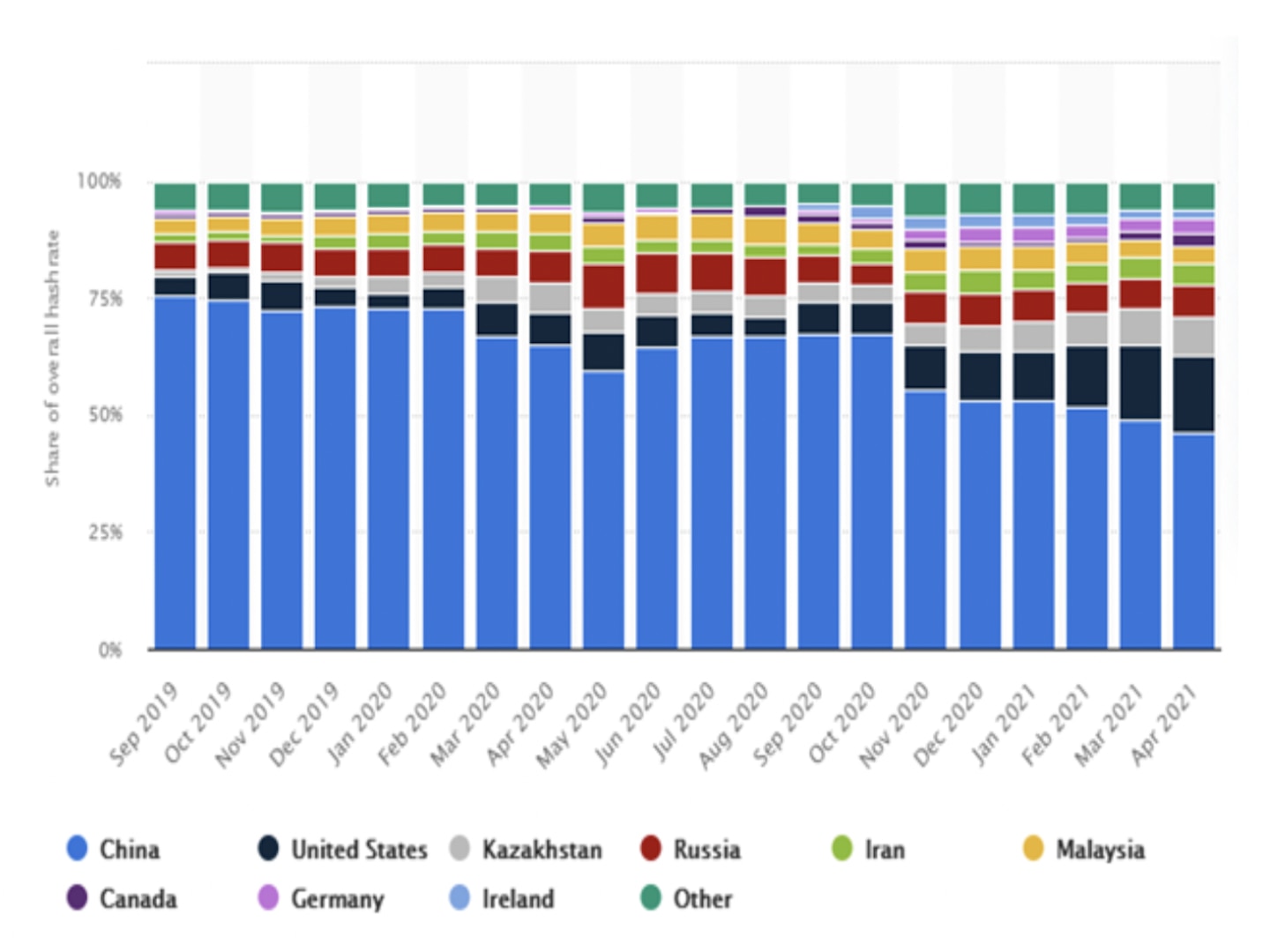 Ether, the world’s second-largest cryptocurrency by market capitalization, dipped below the $3,000 support level on Friday. ETH was down about 8% over the past 24 hours, compared to a 5% drop in BTC over the same period.

Buyers will need to defend support above the 100-day moving average, currently at $2,735, to resume the rally since July. If broken, ETH will need to avoid falling below $2,600, where a majority of long liquidations could occur as discussed in last week’s Market Wrap.

Failure to hold support could trigger further downside toward $2,000, although short-term buyers could remain active given oversold signals on the charts. 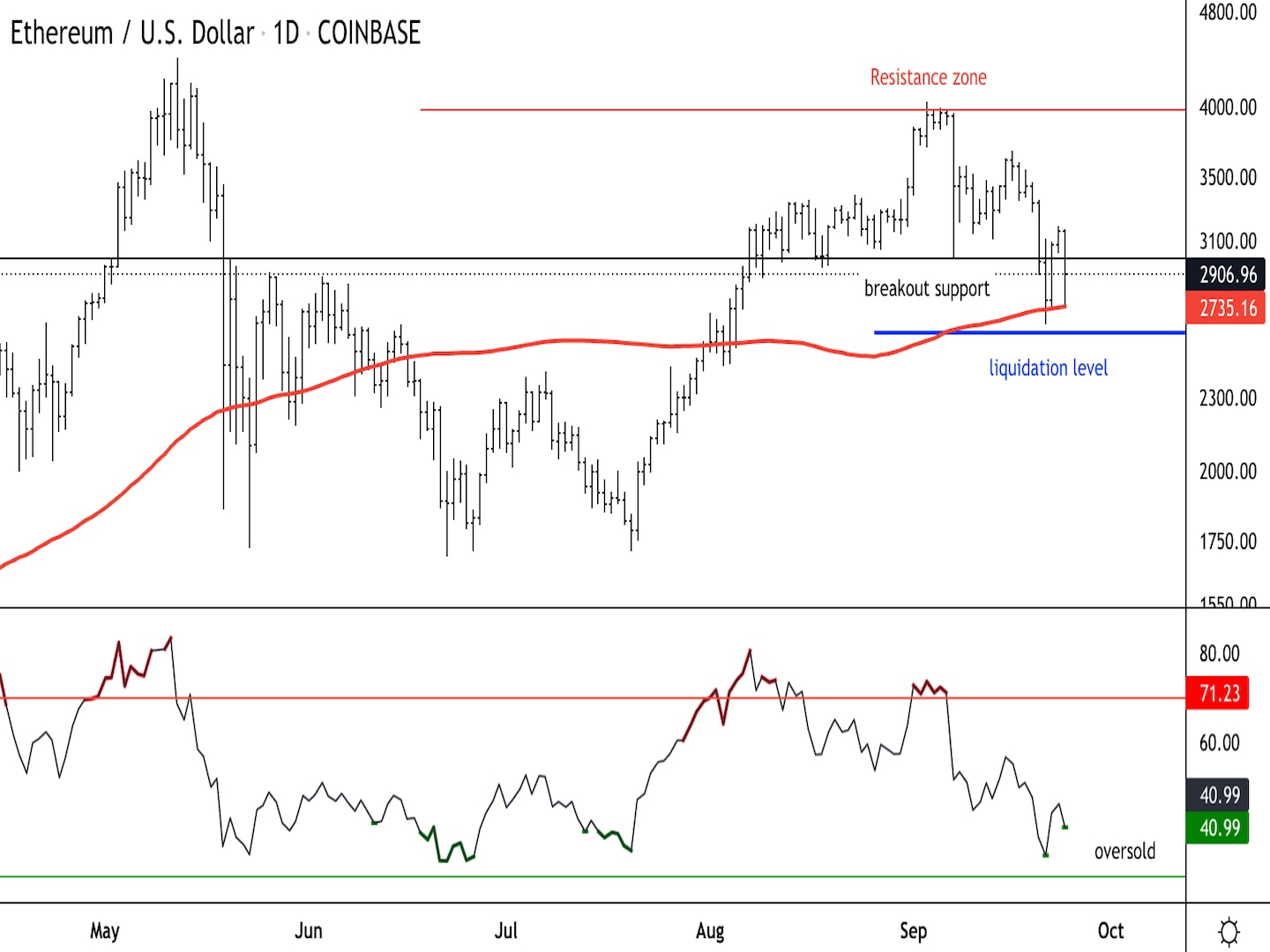 On a related note, the chart below shows ETH trading volumes outpaced BTC on the Coinbase exchange last week.

Additionally, “SOL has firmly established itself as number three, ADA also remains an important contributor to overall volumes, while ALGO has been catching up similar to the previous week,” Coinbase wrote in a newsletter to institutional clients on Friday, referring to currencies related to the Solana, Cardano and Algorand protocols. 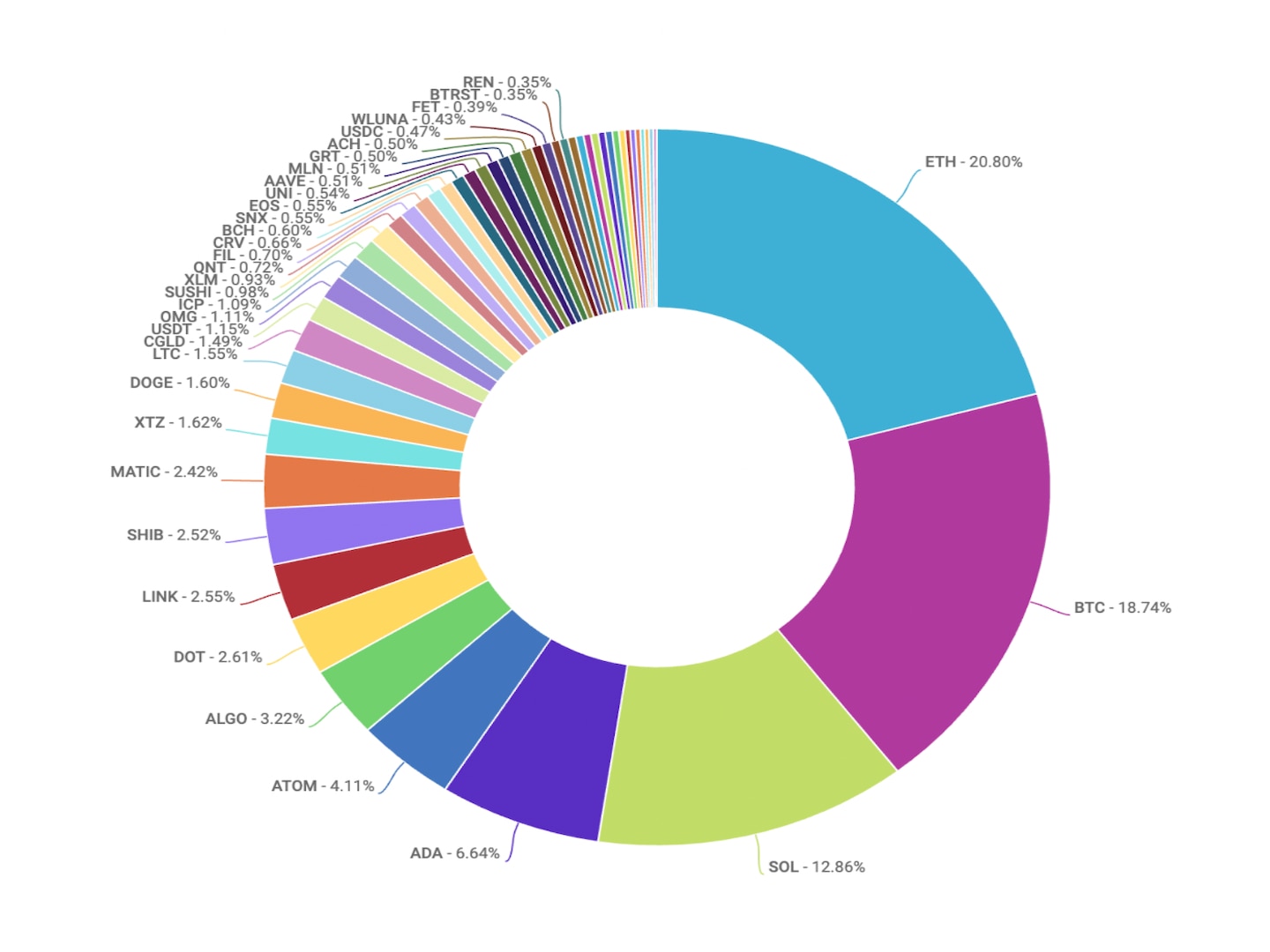 All digital assets in the CoinDesk 20 ended the day lower.