Bitcoin’s price swung from gains to losses and back to gains on Friday after a key U.S. inflation report showed consumer prices rose in November at their fastest pace in 39 years.

The market fluctuations left bitcoin on track for its fourth straight weekly decline, and the starry-eyed forecasts of $100,000 by year end – or even a return to last month’s all-time high of around $69,000 – are now looking far less likely.

Crypto traders had been waiting for the release of the U.S. consumer price index early Friday, because many investors see bitcoin as a potentially useful hedge against inflation. The CPI report showed that the index for all items rose 6.8% in the 12 months through November, the highest level since May 1982, when it was 6.9%. The cost-of-living increase was in line with the average forecast of economists in a Reuters survey and was higher than October’s 6.2% increase. 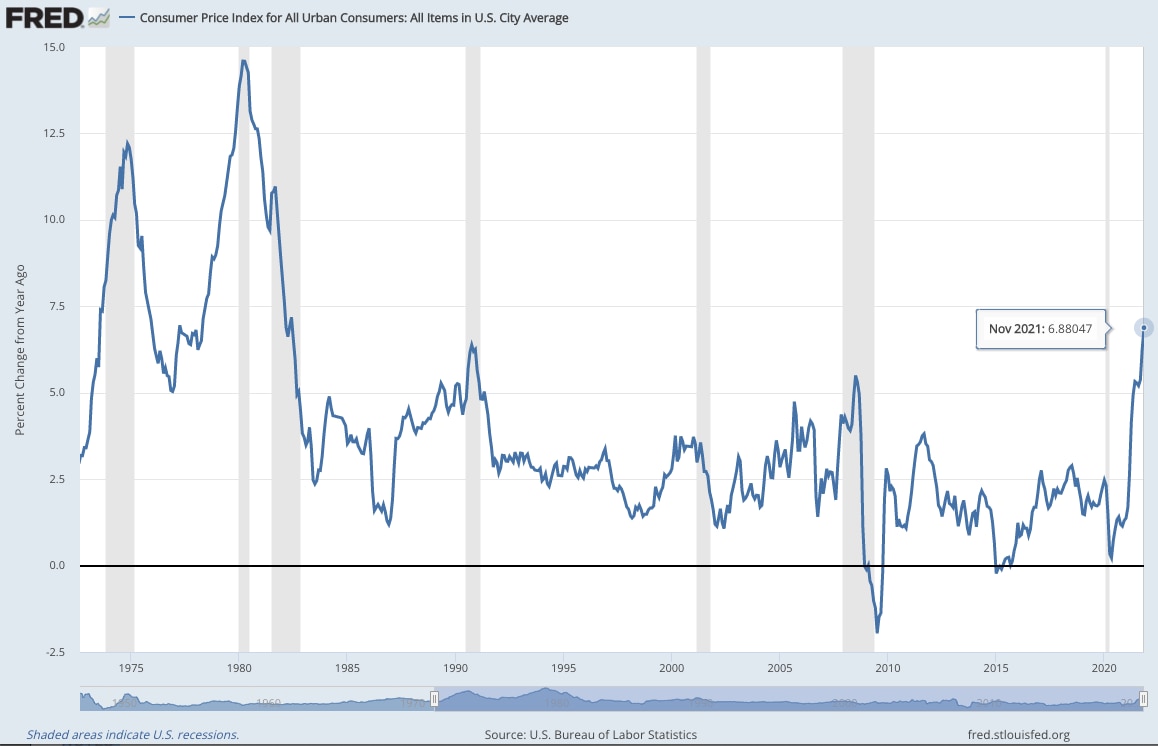 Bitcoin climbed past $50,000 after the 8:30 a.m. ET (13:40 UTC) report, but quickly ceded those gains to trade in the red as analysts leapt to the logical conclusion – that the high inflation rate might provide ample motivation for the Federal Reserve to decide to accelerate its withdrawal of monetary stimulus at its meeting next week – the last scheduled gathering of 2021 for the U.S. central bank’s monetary policy committee.

“If financial markets grow nervous, the Fed may have an aggressive tightening cycle, and the first thing that gets sold is your top-performing assets and that would be cryptos for many traders,” Edward Moya, a senior markets analyst at the foreign-exchange brokerage Oanda, told CoinDesk’s Lyllah Ledesma.

By later in the day, though, bitcoin had turned up along with traditional markets as traders noted that the inflation number wasn’t as high as some economists had warned.

With bitcoin down for four straight weeks, crypto market analysts are starting to discount the likelihood of a powerful end-of-year rally similar to the 2020 moonshot.

“We may not see heavy risk taking by institutional investors in the last weeks of December for tactical reasons,” research analysts for Coinbase Institutional wrote Friday in a weekly newsletter. “As a result, cryptocurrencies may be range-bound for the remainder of December in our view.”

Traders of the Constitution

The plunge followed a broader decline in crypto markets that saw large-cap altcoins like solana, terra and uniswap fall by as much as 9% as of Friday morning.

Some 17,000 participants in the ConstitutionDAO raised $40 million in November to purchase a copy of the U.S. Constitution – in what was one of the largest such collective efforts involving cryptocurrencies.

The collective lost out to Ken Griffin – the founder of the Citadel hedge fund who snapped up the piece with a winning bid of $43 million, reportedly because his son told him to. ConstitutionDAO participants were later refunded their donated funds in the form of PEOPLE.

PEOPLE has no utility and offers no governance rights to holders. But that didn’t stop crypto traders from pushing the token to a market cap of $839 million, according to CoinMarketCap. And the trading frenzy is leading to losses, CoinDesk’s Shaurya Malwa reported.

All the digital assets in the CoinDesk 20 ended the day lower.