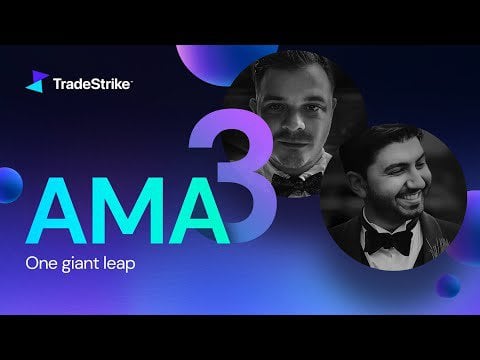 11 Winners selected at random from Discord (1 each day)

“TradeStrike is our flagship product — we’re building a 24/7 trading platform, made for people like us. Trade Stocks, Crypto, NFTs, Real estate and more on one comprehensive and easy-to-use app. Built with blockchain tech and powered by StrikeX.”

The first of their products, TradeStrike Lite, is currently in a ‘soft launch’ phase. This means that only the staking feature is now live, boasting a minimum of 10% APY, potentially rising to 20% depending on the total number of coins staked. The 20% for 30 days previously mentioned will be honoured upon launch of v2 of the DEX. This is to allow the team time to release the product exactly as they expect and iron out any bugs and flaws.

Currently around 50% of the supply has been staked!

With the v2 of the DEX, we can expect a full overhaul with a host of new features, including the anticipated integration of Chainlink Price Feeds – which will be used across all of their future products to ensure premium data quality and reliable benchmarks as they expand towards cross chain compatibility.

The v2 will also allow farming, given an equal value of BNB would be expected to contribute towards the Liquidity Pool.

As the leading name in crypto security, TradeStrike have not only acquired the services of Certik to audit their DEX, they will also be using their Skynet and Certik Shield services. This provides 24/7 security monitoring and insurance of any lost or stolen assets.

During the latest AMA 4, it was revealed that the back end development of the wallet was 95% complete by their developer, Antier Solutions, a highly regarded blockchain development company. There was also a teaser video released and I have to say it looked very impressive!

The StrikeX Wallet would be fully integrated with the TradeStrike Lite DEX and contain portfolio performance tracking & charting.

The Wallet also boasts instant fiat deposits and withdrawals through the integration of BANXA payment gateway. This provides compatibility with Visa, MasterCard and ApplePay.

This will be huge in terms of ease of use accessibility, which seems to be a large stumbling block in the crypto space, especially when it comes to DEX’s and BSC tokens. This should open up the market to many!

In terms of security, you will be able to access to your crypto wallet swiftly and securely with their in-built biometric login.

The main platform which is due for release Q4 2022 of which $STRX will be the native token. This will allow 24/7 trading of crypto, stocks, NFTs & real-estate through the use of Tokenisation and blockchain technology, which is tipped to be a huge industry in the coming years. Working along side one of the biggest law firms on the planet, Latham & Watkins, to ensure regulatory compliance from the start.

We can expect an update on this early 2022, once the StrikeX wallet is smoothly up and running.

Recently STRX has begun listing on multiple centralised exchanges, providing much more exposure and ease of purchase of the coin. So far, this includes ProBit and BitMart, with others expected very soon!

The team have really started to show their intentions with some high profile appointments in the company.

The first of which being Rob Clark, Chief Technology Officer (CTO), who boasts an extensive background across storage, infrastructure systems, networking, security and dev-ops.

The second being their newly appointed Chief Security Officer (CSO), Jason Butler, who has built an extensive background in cybersecurity. With a wealth of experience, Jason’s expertise has proven to be critical in architecting secure, highly scalable and resilient systems for start-ups, large enterprises, service providers and multinational distributors alike.

This, to me, takes them to the next level from being an aspiring cryptocurrency to being a fully fledged business and shows their commitment to delivering their flagship product, TradeStrike. I’d expect further appointments in the not too distant future.

It has been revealed that the TradeStrike team have employed the services of two marketing companies. One being Sapience and the other an unnamed company who are said to have had great success in the crypto space! Hopefully we will start to see things ramp up in the near future.

There is also a huge exclusive partnership in the pipeline, which is in the closing stages on the legal side of things, so far the only clue that we have been given is “3.2 Billion”. They have been told to expect the phone to be “ringing off the hook” once the announcement is made public!

I encourage you all to do your own research and pop into the socials for a chat, where the devs and team are very active.